Luca Pistilli Service Manager siti > Mondolfo's walled town > Pallone col bracciale
Nowadays, the ‘classical game of the Italians’ (D. Burckhardt) is only played in a handful of areas throughout Italy. One such venue is Mondolfo’s municipal sphaeristerium. Nevertheless, there was a time in Italy when gioco del pallone (the Italian expression referring to modern-day football) was instantly equated with quite a different ball game, namely pallone col bracciale. The rise of humanism in the 15th century led to the rediscovery of sports practised by the ancient Greeks and Romans, which included various ball games. However, interest fell on those ball games played with the hands rather than the feet, which were generally regarded as an ignoble body part. As a result, pallone col bracciale came to be played in all Renaissance courts, as mentioned in ‘The Book of the Courtier’, written by Baldassarre Castiglione in the nearby Urbino. Mondolfo was no exception, and the earliest records of the ball game date from the 16th century. The municipal statutes from that period contain several provisions concerning this game, and even two letters written by Ercole d’Este in 1522—mailed from Ferrara to Benedetto Giraldi in Mondolfo—mention a request for twelve balls and thank the addressee for the gift received. 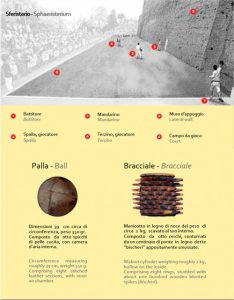 The game continued to flourish and its popularity culminated between the late 19th and early 20th centuries. The poet Giacomo Leopardi dedicated one of his famous poems, A un vincitore nel pallone (‘To a Champion at Pallone’), to a player from the Marches (Carlo Didimi), while Italy’s most imposing sphaeristerium was built in Macerata. The game attracted the passionate support and enthusiasm of the people, fuelled rivalries and betting, and inspired a novel written by De Amicis, Gli Azzurri e i Rossi. Then, towards the mid-20th century, the game’s popularity faded owing to several factors: among them, the onset of football, the high cost of the bracciali (forearm cylinders), the game’s difficulty requiring rare precision, speed and courage, and the closure of several sphaeristeria—especially in big cities—in the wake of new urban development plans. As a result, this quintessential ball game is currently played in only a handful of towns, including Mondolfo. The court (normally measuring 90×16 metres) in Mondolfo is situated beneath the eastern section of the walls, near Porta S. Maria gateway. It is dedicated to one of the all-time legends of the sport, Antonio Agostinelli, who was born in Mondolfo. Popularly known as gioco del pallone by the townsfolk, the court is actually a traditional sphaeristerium. Its location beneath the walls is no coincidence: with the ancient corbels smoothed out, the wall—which was raised in 1874 to improve the playing conditions—forms one of the court’s lateral sides used for bouncing the ball before being struck by the player. In addition, the fact that it faces east allows for playing under the shade in the afternoon The ball is struck with the so-called bracciale, a hollow cylinder weighing around two kilogrammes and worn around the forearm. Made of walnut, it has a grip carved on the inside of the cylinder, while the outer surface has a series of protruding wedge-like blunted spikes, popularly referred to as bischeri. Each side has three players (battitore, spalla and terzino). The balls are struck back and forth with the bracciale either before they bounce, after the first bounce or after hitting the lateral wall (di scozzo).